Skip to content
Home>Food & Agricolture, Hyphenation>TG-GCMS: How to Identify Complex Blends? The Analysis of Coffee Beans

TG-GCMS: How to Identify Complex Blends? The Analysis of Coffee Beans

Both TG-IR and TG-MS hyphenated techniques have the advantage of being real-time methods, however they have the same weaknesses; both show what has evolved from a sample in the TGA at a specific time or temperature, but when a complex mixture of products is released, multiple gases evolve simultaneously and they can make difficult the identification of single elements.

Sometimes overlapping peaks or confusing mass ranges can be an issue. Very low concentrations of materials can be also missed.

It is important to understand the relationship between temperature and gas evolution to avoid misidentifying the products of decomposition or pyrolysis. This can overcome especially with food and drug examination, and leachable substances in packaging which are often present at very low levels in complex matrices (plasticizers, solvents or other contaminants).

We examined an application designed to identify the presence of contamination in coffee beans resulting from storage in plastic containers by using our TG-GCMS / TL8500 interface.

Coupling a TGA to a GCMS can allow the detection of very small amounts of components by trapping, isolating and identifying them in very complex mixtures.

Samples analysed was 10mg. Transfer line heated up to 220°C and connected to our GSV Double Valves Block on the GCMS.

Two main compounds expected in coffee sample: caffeine and phthalates in addition to other elements usually present. Caffeine is the main, phthalates is a possible results of wrong storage. These two peaks are very near one each other during the TGA run – between 56-60 minutes – in a simultaneous evolution of many other gases. The TG-GCMS balanced flow interface can resolve many of these compounds enabling a deeper investigation.

TGA quantified the weight loss of materials at specific temperatures, MS increased the power of technique by identifying the species evolved. By adding a GC there is also the chromatographic separation of co-evolved gases, not in real-time, but this technique makes data interpretation much easier with a very minimal sample preparation!

Another curiosity for the Coffee Day: What characterizes the aroma of coffee? 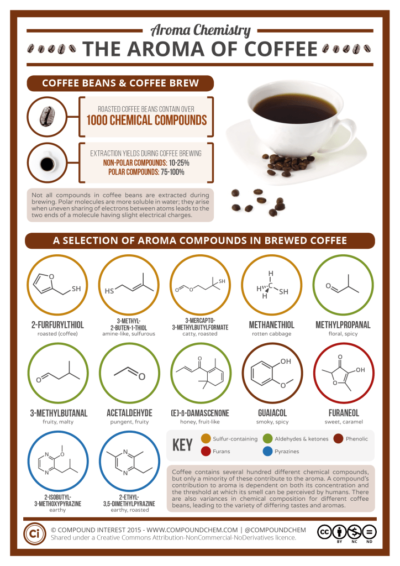